This is a short Elmore Leonard western (232 pages) that I read in a day on the way back from vacation in the Mayan Riviera. It went fast and was a boat load of fun, which made the flight seem really, really short. That’s a great combo.

END_OF_DOCUMENT_TOKEN_TO_BE_REPLACED

Elmore Leonard, God rest his soul, wrote some great western novels. Yeah, I know he’s famous for the crime novel, and I love those, but I suggest you check out a little 3:10 to Yuma if you want to experience one of his Westerns. Or read this book, it kicked.

END_OF_DOCUMENT_TOKEN_TO_BE_REPLACED

I read every Louis L’Amour western novel over the course of about five years as a kid. It took me from maybe 6th through 10th grade. Hondo was L’Amour’s first and one of the earliest ones I recall reading. I grabbed it at an Open Books member half-price sale earlier this year, and I’ll certainly be on the lookout for grabbing more that way because it was a fun read.

END_OF_DOCUMENT_TOKEN_TO_BE_REPLACED

I finished the last two chapters of this book on a plane coming back from Charlotte on a business trip. The flight was half empty and I was seated behind two drunk guys on their way to a bachelor party in Chicago. As I was sitting there in quiet contemplation, the guys in front of me engaged in a long and sometimes animated discussion about Trayvon Martin, Robert Zimmerman, and vigilante justice.

It was a strange confluence of events that forced me to think harder about this book.

If you’re not familiar with the story, you need to know right off the bat that this is generally regarded as the greatest Western novel ever. As a kid, I read a lot of Westerns, so this reading experience really hit home for me. It’s an incredible read and very appropriate for current times.

The story takes place over about 48 hours in 1885 and chronicles a doomed hunt for three murderers by a 28-person posse from a small cowtown in Nevada. It’s told from the perspective of a cowboy in the posse named Art Croft, a sensitive and thoughtful person but a man ill-equipped for the deed at hand. He’s a perfect vehicle to tell the story.

It’s a short book, maybe 240 pages depending on the format. It’s broken down into five longer-than-average chapters. They aren’t titled, but if they were, I’d title them like this:

I read it over the course of a week in four sessions, the last two chapters being a single session. You’d have to be one heartless human to stop after Chapter Four, or just someone with serious time constraints.

This book points out the the evils and perils of the mob mentality and vigilante justice, but it goes deeper. One of the subtler topics Walter Van Tillburg Clark explores is the moral implication of doing the right thing. I’ll use a scene in the book to clarify so you don’t think I’m full of $^|+.

During formation of the posse, the ensuing hunt, and the hanging, there was one man who campaigned tirelessly to cease the charade of justice and bring the suspects back to town to be tried. His name was Davies and he was the local shopkeeper. Davies did everything he could; he got the local judge out of his office to try and stop the posse from going out, he confronted the leader of the posse and tried to reason with him, and he begged other posse members to see his point of view to try and build consensus for stopping the hangings.

Nothing worked. Three men were hanged and their innocence was discovered only moments later on the way back to town.

The aftermath is ugly. The son of the leader of the posse hangs himself when he gets back to town. His father, Tetley, commits suicide by impaling himself on his own sword shortly after hearing of his son’s death. A local rancher promises to take care of the widow and children of one of the hanged.

The reader, I think, finds these pretty meaningless. I still had a sickening feeling for the injustice done to the suspects because it could not be undone. Davies has the same feeling, but he also has a more complicated set of emotions. He feels a tremendous, crushing guilt in his cowardice.

What? Croft, the narrator, is incredulous and tries to talk Davies down from this. Croft expresses that Davies was the only one talking sense and the only one standing up to the leader Tetley, he should feel anything but guilt because he did all he could.

Davies doesn’t feel the same way. He knew the suspects were innocent. He just knew. He also knew that only way he could stop the hanging was to kill the leader Tetley. His guilt resulted from the feeling of relief he felt for not bringing his gun. He was relieved that he didn’t have to make the hard decision to do the only thing that could have saved three innocent men, kill Tetley.

“Yes, you see now, don’t you?” he said in a low voice. “I had everything, justice, pity, even the backing – and I knew it – and I let those three men hang because I was afraid. The lowest kind of virtue, the quality dogs have when they need it, the only thing Tetley had, guts, plain guts, and I didn’t have it.”

“All a great, cowardly lie,” he [Davies] said violently. “All pose; empty, gutless pretense. All the time the truth was I didn’t take a gun because I didn’t want it to come down to a showdown. The weakness that was in me all the time set up my sniveling little defense. I didn’t even expect to save those men. The most I hoped was that something would do it for me.” (pg 234)

Wow man, this blew me away. It was an ultra intense scene in the book and it reminded me immediately of the feeling I had after reading the Pat Tillman book. This feeling that some people just hold themselves to a higher standard.

I felt like Davies was a hero but Tillman, like Davies himself, would probably feel differently. Would Tillman have been the type of guy to stand in front of the unjustly accused with a gun and kill anyone who tried to hang them?

This prompted me to re-read my take on the Tillman book and it just led to more questions about my (our) place in this world. How do I guarantee an appropriate response in times of crisis and conflict, especially when faced with crushing peer pressure? When do you step in and when do you walk away? When do you act on what you really feel? When is it right to decide to take a human life?

This issue was foreshadowed very early in the book but I wasn’t able to connect it until I reviewed things. As the posse was developing Davies tried to nip things in the bud by first reasoning with the group. He even seemed to think one person standing up to them in a non-violent manner would keep them from going. Croft didn’t think so and noted this:

I wasn’t so sure of that. Most men are more afraid of being thought cowards than of anything else, and a lot more afraid of being thought physical cowards than moral ones. There are a lot of loud arguments to cover moral cowardice, but even an animal will know if you’re scared. If rarity is worth, then moral courage is a lot higher quality than physical courage; but, excepting diamonds and hard cash, there aren’t many who take to anything because of its rarity. Just the other way. Davies was resisting something that had immediacy and a strong animal grip, with something remote and mistrusted. He’d have to make his argument look common sense and hardy, or else humorous, and I wasn’t sure he could do either. If he couldn’t he was going to find it was the small but present “we,” not the big, misty “we,” that shaped men’s deeds, no matter what shaped their explanations. (pg 62)

So maybe my description of Croft as “ill-equipped” earlier was wrong and maybe Davies was even less-equipped to stop this charade of justice. Maybe only someone who could apply the “big, misty” morality to the here-and-now in the face of physical opposition could stop this thing. If Croft had this insight, why didn’t he take the action? Or, maybe worse, why didn’t he feel the same guilt that Davies felt? Is Davies just irrational and too hard on himself?

This book is especially appealing to fans of the Western. It has many of the stereotypical western characters but does not have many of the stereotypical western scenes. There was no big shootout at a pre-arranged place and no hero swooping in to save the day with guns blazing. But there was a big woman called Ma who can fight like a man and a Civil war vet who still doesn’t think the war is over.

I’ve thought about this book a lot over the last 48 hours. I need to make a point to come back to it in a few weeks. 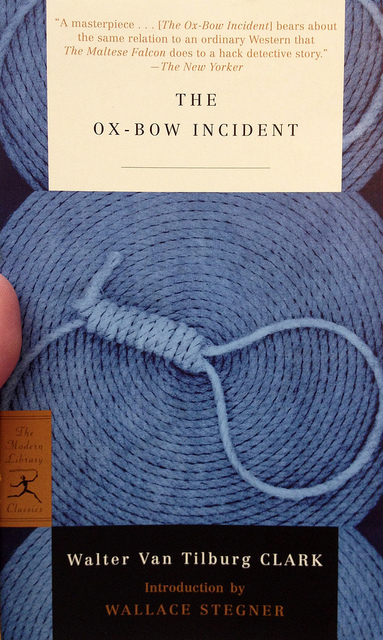