I blasted through The Glen Club with one of the best rounds of my life. I actually can’t recall the last time I played so well on a course of such quality. For some reason, I had a feeling of calm and confidence the whole round, which resulted in a lot of memorable shots and a great afternoon of golf. Everything just came together perfectly.

Let’s put it out there, I did not pay for this round. One of my buddies won a few rounds at a charitable event and I got to partake. For this, I’m very thankful. It was especially nice because it also included lunch before and range balls. All of this resulted in me feeling no pressure and just being happy to be out on a relatively sunny summer Thursday afternoon (we teed off at 2:30).

This course is the cream of the crop in Chicagoland and it’s priced accordingly. Full price at tee time for our round was $160, which is the second tier price behind the $190 Friday afternoon/weekend morning rate. The $100 weekday morning rate is actually one of the better deals going. For reference, Dubsdread is $155 all the time. I played Dubsdread last year and I think Dubs is actually a better course by just a hair. I like the elevation changes and the more tree-locked nature of Dubsdread. It’s close though, man. They’re both worthy of the #1 or #2 spot in the region. Check out my Chicago Public Golf listing where I give a double black diamond rating to about dozen courses in the region, but these two stand out.

The Glen Club is typical Fazio I think. He created mostly wide fairways sitting in valley’s so it’s pretty easy to let things rip off the tee on every non-par three except for the picturesque #8 hole. He seemed to have moved a fair amount dirt to create the four beautiful peninsula or near-peninsula greens (#5, #11, #17, and #18). The bunkers are big and prominent when standing on most tee boxes. It’s quite a stunner, I must say.

It inspired me to hit a strong four wood about 230 yards on the brutal #1 handicap hole #7. It’s probably the best fairway wood I’ve ever hit and my best birdie on a par four ever. It also inspired me to hit a 165 yard six iron out of a bunker on to a well-protected #12 green. But mostly, it inspired me to shake off almost having the wheels fall off on #15 and #16 with pars on the last two holes. I gave myself a pep talk in my head walking up the the #17 tee and I actually executed on it.

Damn, it all felt so good.

This is coming on the tail end of some bad outings. I’ve struggled to break 90 for the last two months and everything just came flooding back today. Call it luck. I don’t care. I just want it to happen again soon because it was awesome. 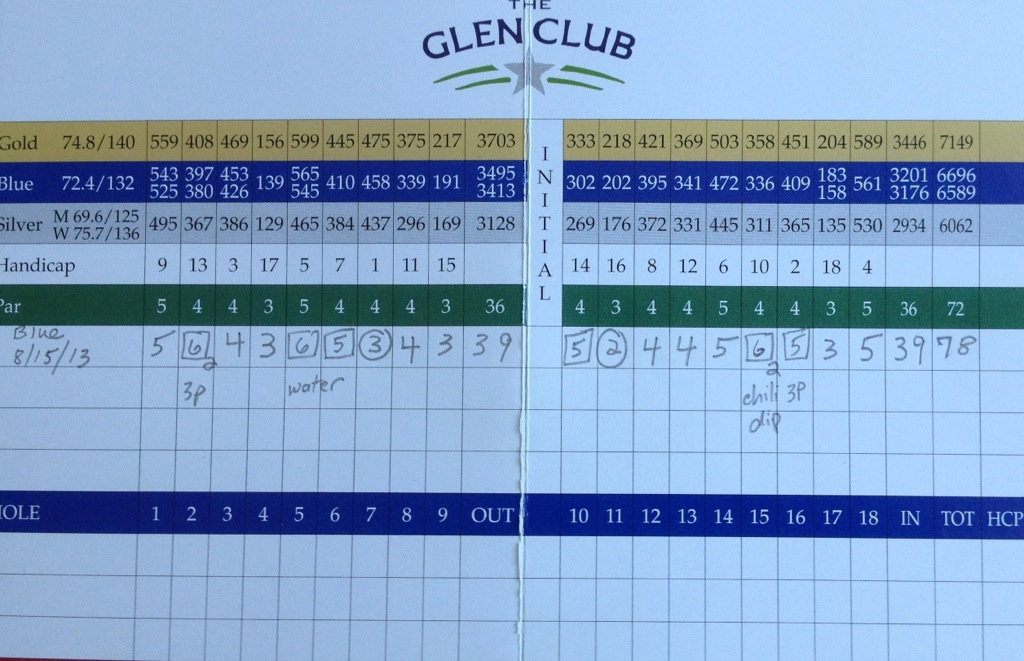