Deighton’s structure strikes me as genius right now. It feels like a huge hill climbed and now we’re going down the other side. From a page count perspective, it’s symmetrical, it took as long to get here as it will take us to get down. But from an effort perspective, physically and emotionally, it remains to be seen which side of the hill is longer and more arduous. Here’s the top of the hill statement:

She’d heard me say a million times that field agents have to have the last word in such matters. I’d always used my experience as a field agent to have the final decision. Now my wife had proved to be the most amazing field agent of all. She’d moved into the top echelon of the East’s espionage network and fooled them all. I was in no position to argue with her. (page 159)

I was fooled. Yeah, maybe I knew a little before this point, but not much. The beauty of how I was fooled is part of the point. I was fooled because the main character was fooled – hook, line, and sinker… so to speak.

Let’s tear down the analogy of climbing a hill. The nearer the reader, and the main character, gets to the top, where the mystery unravels, the more complicated the mystery becomes. In fact, it’s really not a hill you’re climbing, it’s an iceberg, and there’s this deception that goes back decades that you can’t see, below the water line, and you have only a small indication of how huge it really is.

That’s where we are, the tip of the iceberg, and we have no idea how big the rest of the iceberg is, nor how complicated the trek down the other side is going to be, thus prompting an insatiable urge to keep reading.

However, I’ve squashed this urge to keep reading and I won’t pull out the next book for a while because it doesn’t seem healthy. I’ve read the first five books in the last fifteen months and I’m going to do some spacing because I need to get some non-fiction in. I have to break up the action.

I did, however, peak at the next book and I noticed this little author’s note inside the front cover. 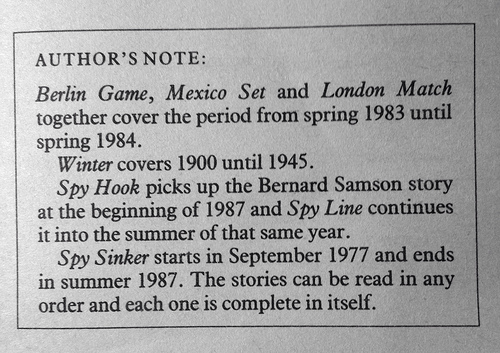 I haven’t noticed a message of this sort in any other of the other books and it’s the first time I’ve seen it acknowledged that Winter is part of the epic (making it ten volumes). I’m also not sure I agree that each one stands alone. I get a lot of value out of the whole experience.

That’s all for now. I’ll pick it up in a few months. Oh yeah, this reminded that I have to watch Tinker, Tailor, Soldier, Spy still. 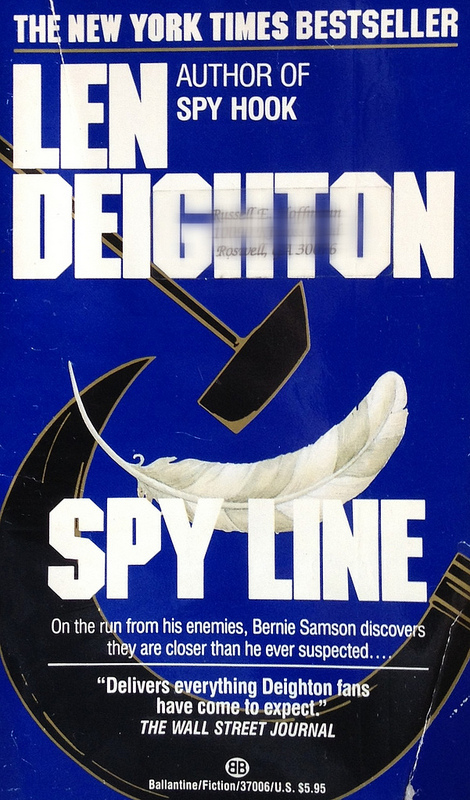