I’m trying to improve my writing. Really, I am. It’s fun and I want to get better at it. Contrast this to my feelings about golf, something else that’s a lot of fun, which I don’t feel a compunction to improve. I just love to play; I don’t practice and I don’t get too discouraged on bad days or too high on good days. It’s golf. Whatever happens, happens.

Right now I’m thinking: “What’s the proper punctuation for that last sentence?” Should it be?:

Or should it be?:

Good lord. Are all those question marks in the right place? I’m stressed. I hate this.

I’m self-conscious and insecure about the words here. I don’t publicize it because this is all just practice, man. It’s like when you first start playing golf and you aren’t comfortable playing golf with strangers; you don’t seek it out, but you have to do it. If someone joins up with you, so be it. So I’m doing it. Writing in kind of a public manner but not really telling anyone about it. People may occasionally stumble across this site and think I’m a dumbass. It’s stressful, but that’s okay. Hopefully I’ll get better.

I’m practicing for some time down the road when I really want to devote time to amateur journalism. A time when anyone who wants to have a voice can have a voice. We’re gonna get there. Heck, we’re almost there. I can’t imagine what this is going to be like in ten years, but I do know that I want to be ready with a basic set of writing and analytical skills so that I can churn out quality content in a timely manner.

Enter Lynne Truss and her book about punctuation. It’s a whole book devoted to explaining the usage of commas, periods, apostrophes, etc … It’s bigger than that though. It’s also devoted to wry, English wit and the power of preserving something that seems part of a bygone era. It’s an impassioned piece of work. I like Truss.

Here’s what you get, from the colon and semicolon chapter:

But colons and semicolons – well, they are in a different league, my dear! They give such a lift! Assuming a sentence rises into the air with the initial capital letter and lands with a soft-ish bump at the full stop, the humble comma can keep the sentence aloft all right, like this, UP, for hours if necessary, UP, like this, UP, sort-of bouncing, and then falling down, and then UP it goes again, assuming you have enough additional things to say, although in the end you may run out of ideas and then you have to roll along the ground with no commas at all until some sort of surface resistance takes over and you run out of steam anyway and then eventually with the help of three dots … you stop. But the thermals that benignly waft our sentences to new altitudes – that allow us to coast on air, and loop-the-loop, suspending the laws of gravity – well, they are the colons, and semicolons. … (pg 106)

Nerdy, funny, inventive for sure. It’s a short book, but gives Truss enough time to dig into the history of punctuation while remaining highly applicable to what you’re writing today. She has plenty of everyday examples augmented by lists of rules that clarify and illuminate. I’m not quite sure how I’ll use it. Whenever I finish a good reference book I always tell myself I’ll come back to it and review the rules, maybe type them into little lists in Evernote that I can refer to, but I never do.

It will probably have to wait until that magical time, when I’m retired and have some expendable hours, at about 90 maybe, at which point I’ll be able to partake in some amateur journalism of a serious nature. 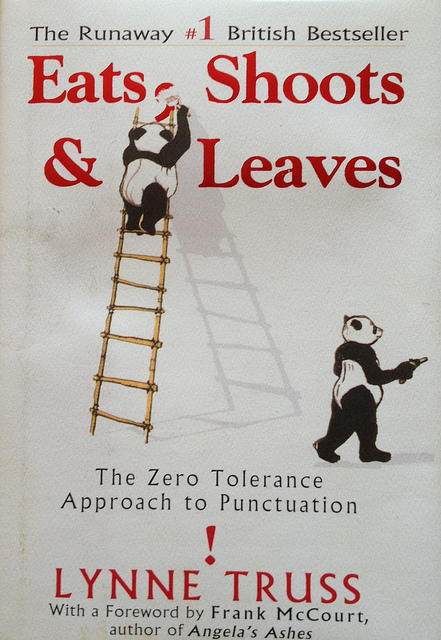